A disaster of a half marathon 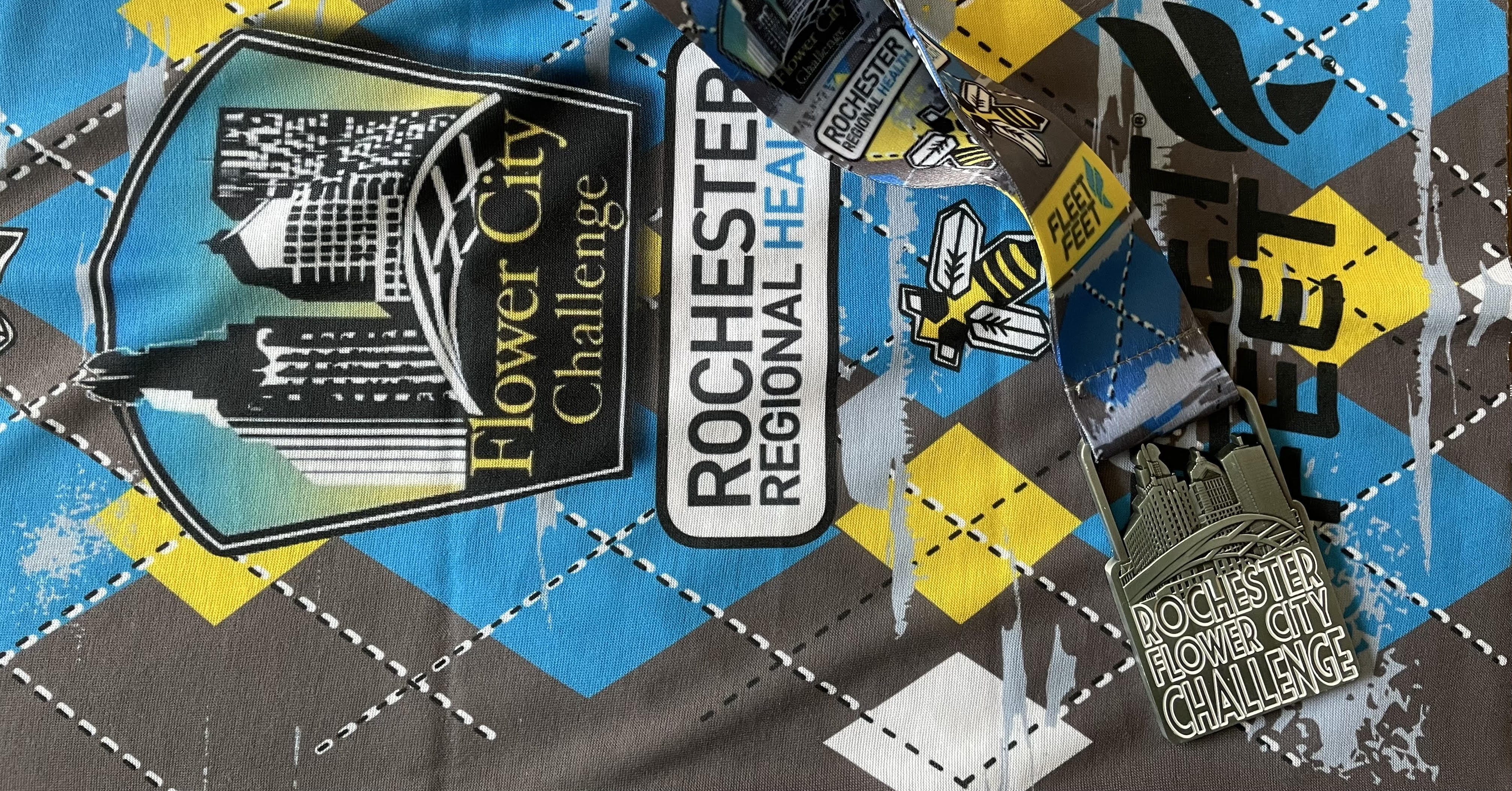 I came into Sunday’s Flower City Half Marathon knowing full well that I was a bit out of shape, still I did not expect things to go as poorly as they did. I finished with a time of 2:28:33 which is over 20 minutes slower than when I felt I was poorly prepared for the same event last year.

The first two miles of the race went pretty well. There were no pace groups or split times this year, but I felt like I started slowing down a bit before mile three. Just after the half way point, I decided it was best to walk up the course’s largest hill. On it’s own it was a reasonable decision for my pace so far at that point, but I had trouble getting my legs back into gear after that. At the 90 minute mark I was only 8.5 miles in, and some quick math left me pretty demoralized for the rest of the race. I ended up doing a run/walk routine for the final few miles, that got me to the finish, but didn’t leave me feeling accomplished.

My next race is the Allegany Adventure Run next Saturday, which is even more miles and more hills. Hopefully my fitness level turns around over the next five days.

My Longest Race in 20 Months 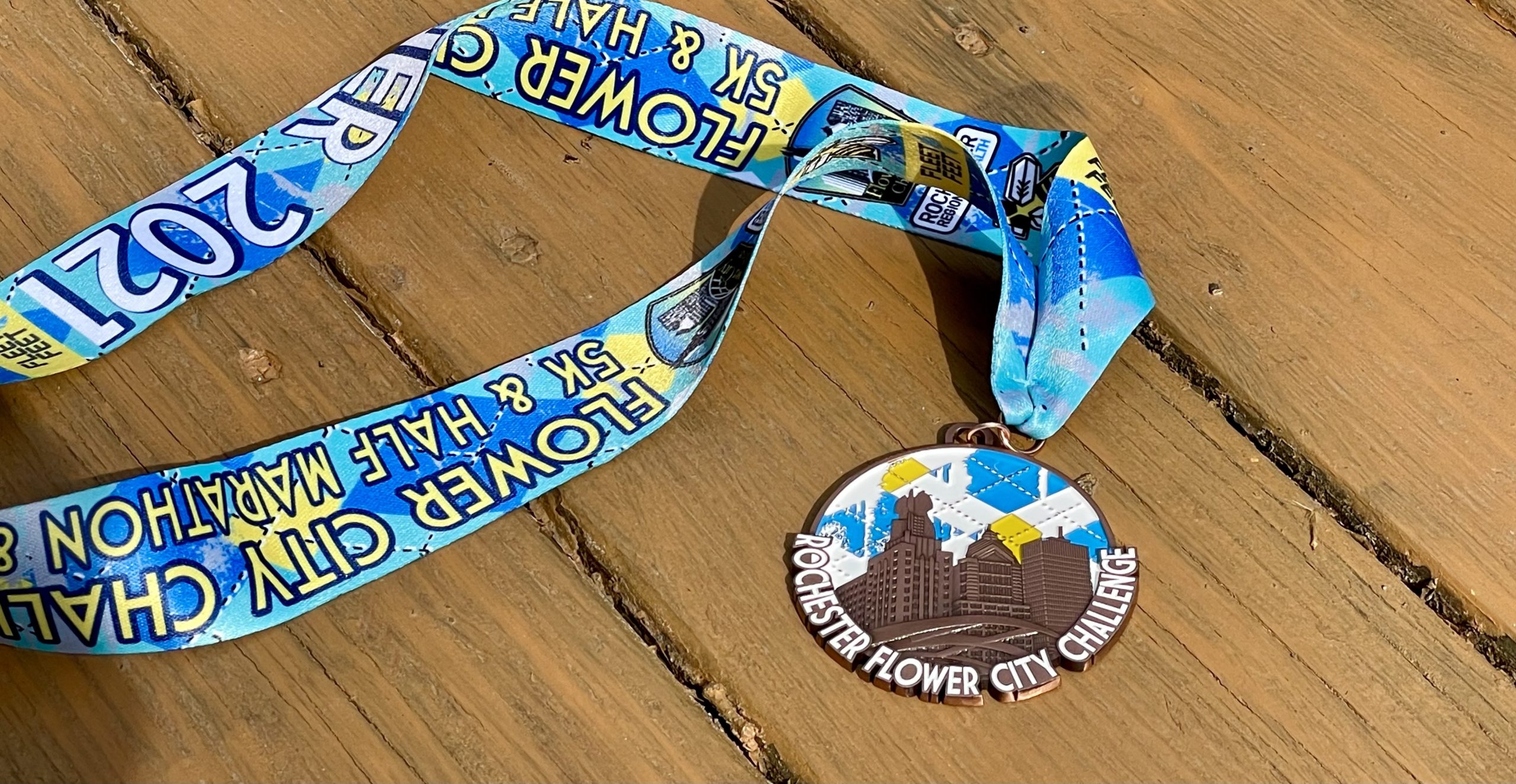 On Sunday morning I finally ran the Flower City Half Marathon, after the race had been repeatedly postponed for over a year. I finished the race in 2:07:46, which while not a great time, isn’t really a complete disaster either. While I would ideally be finishing in under two hours, my time was only a minute and a half behind my last half marathon, and was actually quicker than the 2018 Flower City Half.

Planning this race under covid restrictions resulted in a different course than most years, following the trails on the canal and the river instead of through the city streets. Thankfully much of the trail was under shade (including almost all of the second half) so the higher temperatures of running a race in June were not too much of a bother. I carried my own water in the race, which I normally don’t do for half marathons, but felt like the right decision in hindsight.

Despite this being the longest that I have ran in the past year, I felt ok, and kept a fairly steady pace throughout the whole run. I don’t think that I really could have gone too much faster, but I didn’t feel as if I was falling apart either.

Next week is the Buffalo Marathon which is another race that has been repeatedly postponed and is finally ready to happen. I am not in shape to do great, but I am fairly confident that I can finish.

On Sunday morning I ran the Flower City Half Marathon for the fifth year in a row. I finished the run in 1:54:25 and in the top 30 percentile. On one hand I am genuinely disappointed to have not finished in under 1:50 (as I did in 2017), but at the same time this race was not a complete disaster. I was over 15 minutes quicker than last year, and a minute quicker than the Rochester Half last fall.

The weather was rainy, and I was a bit slow to get to the starting line. This forced me to start out a bit slow for the first half mile which was probably a good thing, given my tendency to go out too fast. By the first mile I had passed the 1:50 pace group and was pushing to catch up to the 1:45 group. I finished the first 5k in 25:20 and while I was still feeling strong at this point I also realized that I was no longer making progress on catching the group ahead of me.

The 1:50 pace group passed me just past mile five, and I finished the first 10k with a time of 52:36, which felt good but I realized that I was not going to PR in this race. The third quarter of the race contains the biggest hill on the course and (as with most years) was my slowest section. I didn’t feel bad, but my pace felt a bit off through the cemetery. Once I reached the river at mile 10.5ish I started feeling better about the run and finished well. My pace after the final checkpoint was equal to that of the 5k to 10k section.

I will get another chance at the half marathon very soon as my next race is the Grand Island Half this Saturday.

The Slowest Half Marathon On Sunday I ran the Flower City Half Marathon for the fourth time and finished with the slow time of 2:10:55. This is disappointing because I have set a PR in this race every other year, and was even a minute behind my time from the 2014 Buffalo Half.

Given that my weekly mileage is in the single digits, and that my 15k race from a month ago implied the exact pace that I ran, it was still a disappointment.

I started out the race with the 1:45 pace group. However, while I usually need to hold back to stay with a group through the first few miles, I instead found myself pushing to keep up. After the first mile, I realized that my pace was not sustainable and I fell back. The 1:50 pace group passed me before the 5k mark, and the 2:00 pace group passed before the 10k point. After that opening mile, I feel that my pace was actually pretty steady the rest of the way. The only exception being that I was a bit more prone then usual to grab a drink from the water stops as I knew that my time wasn’t going to be great.

My next race is going to be the Taco de Mile for which I have zero expectations, and the foreknowledge that my time will be rather meaningless.

On Sunday I ran the Flower City Half Marathon for the third year in a row. Also I used this race to improve my half marathon personal record for the third straight year.

I finished in 1:48:12 dropping over two and a half minutes from my previous PR. This time was good enough to put me in 374th place, and the 18th top percentile of finishers.

The weather was overcast and a bit cold, and half an hour into the race it started to rain on and off for the rest of the race. Which is to say that it was perfect weather for a run, and rather terrible weather for anything else. I did a good job staying close to the 1:45 pace group, finishing the first 5k in 24:32, and the second 5k in 24:36. Six and a half miles into the race (at the first big hill), I got dropped by the pace group. Still I did a better job this year on the second half of the course and finished under 1:50 for the first time ever.

I will be getting another chance to drop my PR even further at the Grand Island Half this Saturday. On Sunday I set a new Half-Marathon PR with a time of 1:50:52. This is three minutes faster than I ran this same course last year.

As usual, my plan to stay with a pace group really didn’t work out. I lined up next to the 1:45 group, and immediately left them behind. They would not catch up to me until mile six. After the quick start, I felt ok on the hill but never regained my pace in the cemetery. I really struggled through the final few miles after earlier thinking that I had a real chance at breaking the 1:50 mark. Still, there is no such thing as a bad PR. The second day of the Flower City Challenge lead to me finishing in my best time ever for that distance. I finished with a time of 1:53:50 which was five minutes and eleven seconds quicker than my previous personal record. This was good enough for me to be the 528th runner across the finish line, and placed me among the top quarter of finishers.

Additionally I believe that my 10k split of 52:03 is the fastest that I have ever completed that distance.

My plan to stay with a pace group mostly didn’t work. I started off with the 1:50 pace group, but on a downhill around the 1.5 mile mark I pulled a bit ahead until they caught up to me close to the 2.5 mile mark. I then stuck with them until I started to slip around 4.5 miles, but they didn’t drop me completely until around the six mile mark. I am not sure that my efforts to stay with them were any different than my typical approach of starting out a bit quicker than I finish.