A Marathon in Buffalo 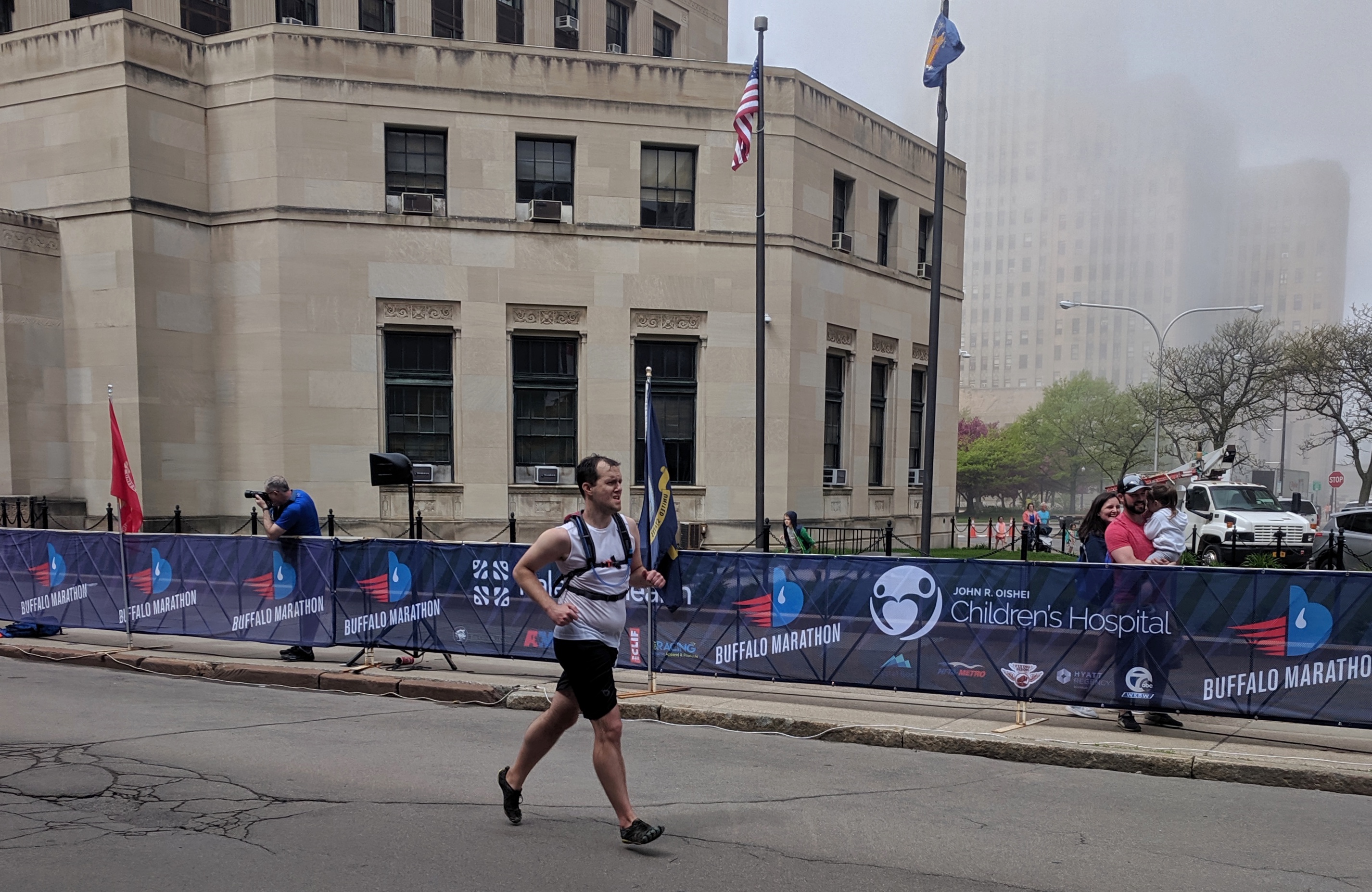 On Sunday I finished my second marathon in as many weeks, running the Buffalo Marathon in 4:42:23 which while not as quick as I was hoping for was still 14 minutes quicker than last year.

The course was extremely foggy at the start, which was great weather for a run. However, my foot was still hurting a bit from last week and I was somewhat concerned that I hadn’t had enough time to recover. The foot turned out to be fine, but the overall fatigue ended up doing me in.

My plan was to try and stay with the 4:20 pace group, as that strategy worked well in the Wineglass marathon. I started a bit back in the corral, caught up to the pacer, and then lost sight of him around mile two and did my best to keep things slow and even. I ran the first 5k in 29:36, and the second 5k in 30:20. Both of which were a bit faster than I had planned.

Still I was feeling good, and my next 5k was actually my fastest of the day at 29:27. With the sun nowhere to be found, and the course enveloped in a mist I was really confident in my run. Around mile 11 the pacer caught up to me and I pushed myself to keep up. Crossing the 20k mat it was clear that I ran a negative split over the first half, and that the pace was a bit off. The fourth 5k was in 30:15 for an opening 20k just under two hours.

I crossed the half way point in about 2:06, and given that it was apparent that the pacers were way to fast and not slowing down I decided to fall behind them at mile 14. By the 25k mark (15.5 miles) I was still on track for a sub 4:20 finish, but the sun had come out and the course was getting warm.

By mile 17 I was really hurting, however knowing how little shade was available within Delaware Park, I knew it was a poor part of the course to take too much of a rest and pushed through to the 30k mark before really slowing down. I finished the first 30k in 3:07 and was technically still on track for a really good time, however I knew that I wasn’t feeling great and that the final 12.2k was going to be ruff.

I really slowed down a lot over the end of the course falling back to a run walk pace, and eventually getting passed by the 4:30 pace group near mile 21. Overall I felt my effort was pretty consistent over the last few miles, it just wasn’t that fast. I am not sure if I was undertrained, still beatup from last week, or hurting from starting too fast. Overall my 4:42 time was the third fastest of my five completions of this course. And next weekend I am not running a marathon.