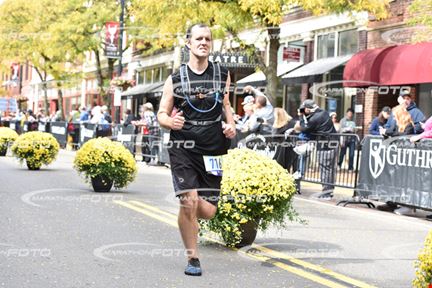 On Sunday morning I ran the Wineglass Marathon in Corning. I finished the race in 4:37:11 which was slower than I wanted, but quicker than my time in Buffalo earlier this year and also slightly quicker than my time on the same course in 2018. To the best of my knowledge, this was my second quickest marathon ever, but I had felt like my training had gone well and the weather was great so my expectations were for something better.

As with most my races I started way too fast. The original plan was to run with the 4:20 pace group, but that group didn’t exist so instead I started with the 4:15 group. (And after just a single mile pushed on to a quicker pace.) I ran the first 10k in a rather quick 58:23, and then held steady at that pace to finish the first half in 2:03.

At this point I was feeling great, but things started to fall apart at mile 15. My pace was gone and I started to get passed by more runners with the 4:15 pace group finally catching back up to me just past mile 18.

At mile 20 I hit the wall hard and reduced to a run/walk pace for the final few miles. I managed to hold off the 4:30 pace runner until just before mile 24 after which I lost some of my motivation over the final two miles. In hindsight it wasn’t actually as bad of a run as it felt at the time, but I will probably have to extend my long runs if I want to do better in the future.

On Sunday I ran the Wineglass Marathon from Bath to Cornell. I finished in 4:38:12 and while this was slightly slower than I was hoping for, it was only six minutes off from my PR. Despite things not going well in the final 10k, it was actually a fairly good time a quite a bit quicker than my marathon from earlier in the year.

The day before the race the forecast called for no rain. An hour before the race the forecast said that the rain would stop soon. Instead it rained all day long. Normally I like to run in colder temperatures, but combined with the rain it was very cold at the start and never really got significantly better. However for a marathon I guess being too cold is better than being too warm.

I reached the half way point in 2:09:34 still feeling good, but also realizing that this course wasn’t as downhill as promised. While far short of the hills on the Rochester marathon course, Wineglass includes a fair number of rolling hills that keep the course from really being all that much easier than a flatish marathon like Buffalo.

By mile 17 I was starting to feel tired and knew that eventually I would have to slow down a bit. I maintained pace for a sub 4:20 marathon up until the 30k point and then backed off a bit. I started walking a little after 20 miles, but by the 35k mark I was still on pace for a 4:28 finish. Unfortunately I just couldn’t quite keep that up and ultimately crossed the line in 4:38.

Still there were some good things to take away from this race. My pacing through the first 30k was strong and steady, and a pace that I would be comfortable staying at for my next marathon. Also my time of 2:28 for the second half is actually the quickest I have ever ran the back half, and therefore this was also the closest that I have ever come to having even splits at this distance.